All the world’s a stage,
And all the men and women merely players;
They have their exits and their entrances,
And one man in his time plays many parts,
His acts being seven ages.
As You Like It Act 2, scene 7, 139–143 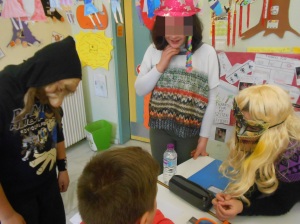 In theory, drama puts the teacher in the role of supporter in the learning process and the students can take more responsibility for their own learning.  Ideally, the teacher will take a less dominant role in the language class and let the students explore the language activities.  In the student centered classroom, every student is a potential teacher for the group.
Drama for second language learners can provide an opportunity to develop the imagination of the students. The students can go beyond the here and now and even ‘walk in the shoes’ of another. It provides an opportunity for independent thinking. 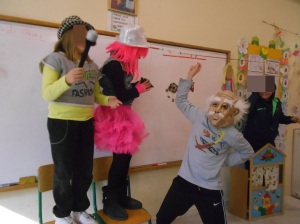 When the students are having fun, they let their second language guard down and become less inhibited.  The student will tend to relax and stop blocking out the new language.
In the ESL/EFL classroom, role-playing is a powerful tool.  It teaches cooperation, empathy for others, decision making skills and encourages an exchange of knowledge between the students. 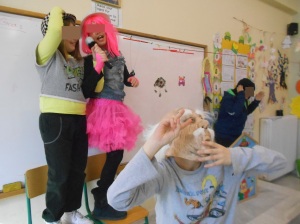 The benefits of drama to develop the imagination should not be undervalued.  In our rote school routines of memorization and compulsory subject matter, we sometimes do not spend enough time on encouraging our students to use their imagination.  It is the spark that makes the ordinary into something incredible.  Imagination is the magic force that is beyond facts, figures and techniques which can inspire new ideas.  It is with imagination that the ordinary is transformed into something significant. 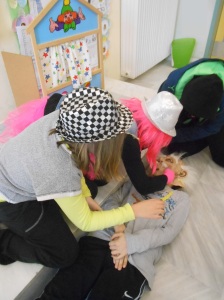 We shouldn’t underestimate this powerful teaching tool to reach our students.

Having all the above in mind, I decided to have my students use their carnival accessories and costumes, as their inspiration to create their own skits, working  in groups! It was actually the day, the school Carnival party would take place during the last two teaching hours, therefore all the kids were in the spirit of  Carnival fun and came to class wearing Carnival masks and costumes ! It was difficult to have a..proper english lesson under the circumstances, therefore, I decided to ask them to use their costumes and masks as realia and write and act out their own skits, working in groups! The outcome, was amazing! It was hilarious! I love it when my students become creative! 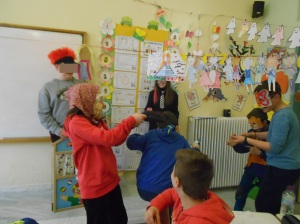 Although, my students used their own scenarios , I also asked them to play one  favourite drama game  :

1.  Divide the class into groups of 3-4 students each.

2.  One member of the group must tell the others a true story about an event in his/her life.  Encourage him/her to describe it in as much detail as possible.  This person becomes the “director”.

3.  The director then chooses members of the group to play the various characters involved in the scene (including him/herself).

4.  The actors then improvise the scene in front of the director.

5.  After each run-through, the director should give notes. Then the group improvises the scene again.  The goal of the director is to make the scene as believable as possible. 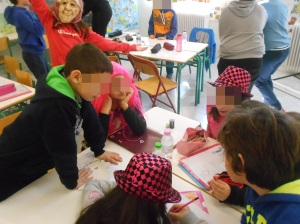 6.  Once the directors of each group are satisfied with their scenes, have the groups share in front of each other.

With my very young learners, we tried several Carnival fun games such as ” The Carnival King says…” 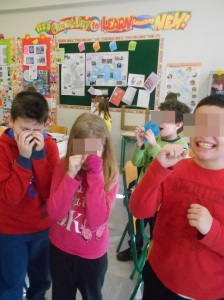 or many Carnival-themed vocabulary games such as the one shown in the photo below, called” The Carnival masks dictation”  , played in teams! 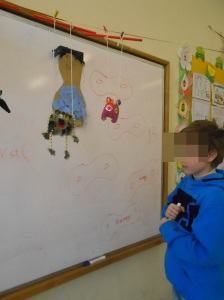 I also, had my afternoon students make these special LEG puppets 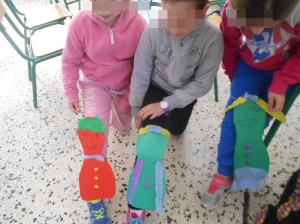 and use them to play ” Musical chairs” or ” Freeze”! I finally asked my older students to use the leg puppets in order to act their own puppet shows! 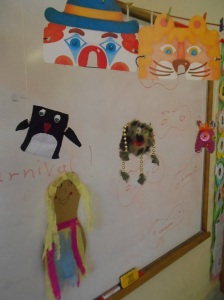 Improvisation , was the key issue in that, too! 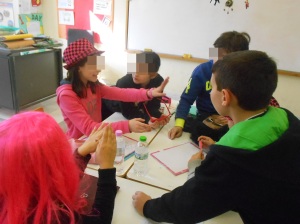 Working in teams to create the story!

That was an alternative english lesson, which we all enjoyed , as you can see in the photos!

Highly recommended to all teachers! 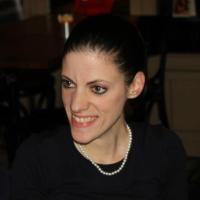 Still Standing - Careering Into My Seventies

A Blog About Education

when kids wonder, wonders can happen...

The latest news on WordPress.com and the WordPress community.

A Hive of Activities

A blog by Maria Sachpazian on Teaching and Teacher Training